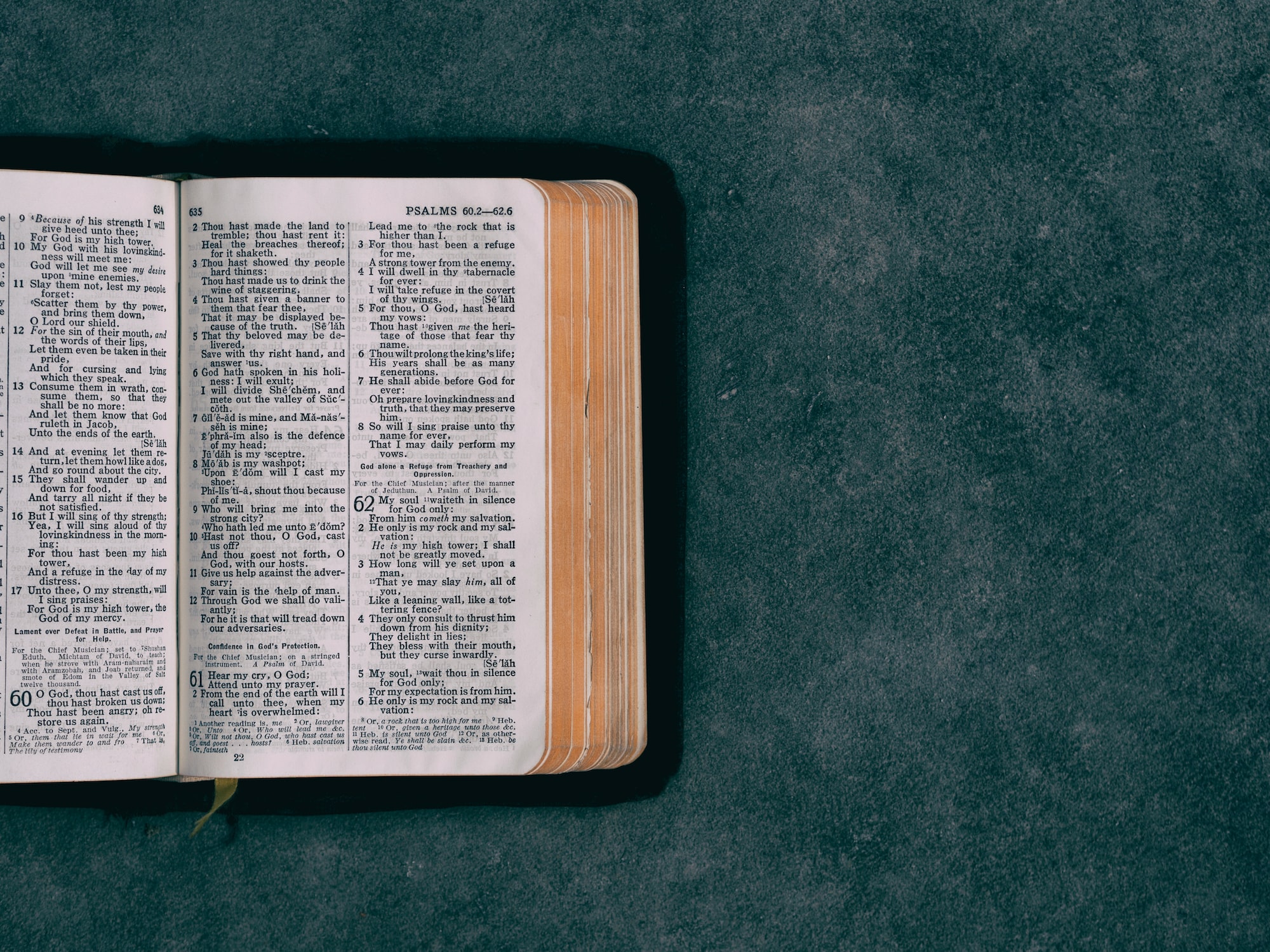 You may or may not believe its truth claims, or ascribe to its worldview, but regardless, the Bible is a fascinating compendium of historical narration, legal documents, poetry and eye-witness accounts. This list is very quick look at the book as a whole, starting from the creation of the world and ending with the promised conclusion of Heaven. I hope you’ll set aside some time and read the selected passages, write down some questions, and let me know what you think.

The book that we call “The Bible” really is a collection of 66 books written over a 1500 year period by 40 different authors. It is split into to major sections, the Old Testament (first 39 books) and the New Testament (last 27 books). The Old Testament really revolves around God’s chosen people, known as the Hebrews, Israelites, and finally, Jews.

According to Genesis, God created everything. Humanity is God’s crowning creation, and is created “in His image”. However, pretty early on, Adam and Eve (the first people) choose to rebel against God and commit the first “sin”. This pattern follows throughout the entire Bible.

Abraham is a man who does what is right in the eyes of God. God tells him that he will be the patriarch of His chosen people, the Hebrews. Jacob, the grandson of Abraham, is renamed Israel (the namesake of the people, and eventually, nation) and is then told that his offspring will be blessed throughout history. Fast forward to Jacob’s son Joseph. He is sold into slavery in Egypt by his older brothers, then through a serious of amazing events, becomes second-in-command to the Pharaoh himself. The Hebrew people are blessed, but after many generations, Joseph is forgotten and they are enslaved. God decides to send them a man to lead them out of slavery into a promised land.

Once out of slavery, and wandering through the desert, God gives His people laws to obey that will bring that back into “righteousness” so that, like Adam and Eve before sin, they can have a relationship with Him.

The people of Israel obey God, and then disobey, over and over. This cycle continues and they are given leaders, called “judges” to help steer them back to God in these times. Eventually, they decide that they want to be like other nations and ask for God to give them a king. Saul is the first king of Israel, but eventually rebels against God himself, and is succeeded by a man named David. David, despite his failures, continually turned back to God and is called “a man after God’s own heart.” He, and many other prophets prophesy of a coming savior for humanity.

After the last book of the Old Testament, Malachi, there are around 400 years of silence before the birth of Jesus, who is to many living at the time, the promised savior of not only Israel, but all of humanity. After living in relative obscurity for thirty years, Jesus began His public ministry, performing many miracles and teaching about the “Kingdom of God”.

The Spirit And The Church

Before Jesus was crucified, He promised that He would send “a comforter”—the Holy Spirit of God to live within all who followed Him. This Spirit would empower the followers of Christ to live holy lives, full of power. On the day of Pentecost, a celebration 50 days after Passover (when Jesus was crucified), the Holy Spirit arrived on the scene with miraculous signs. Many were converted, and at this, the worldwide body of believers (or the Church) began. Many Jews that did not accept Jesus as the Messiah, began to persecute the followers of this new “cult” and Saul of Tarsus was among those who killed those that did not denounce. God decides that Saul would be a great evangelist, and appears to Him to explain that Jesus is His son. The Apostle Paul (the Roman version of his name) would go on to write two-thirds of the New Testament.

Making Sense Of It All

As believers congregated across the ancient world, local churches began to spring up, so Paul and other Church leaders wrote letters to address issues and explain all that had happened (this is why we have the New Testament).

John, one of Jesus’ closest disciples, was exiled to the island of Patmos in his old age, and received visions of things to come. He wrote them as a letter in what would be called the book of “Revelation”. This told of Christ coming back, the judgement of the wicked and the establishment of an eternal, heavenly Kingdom of God.